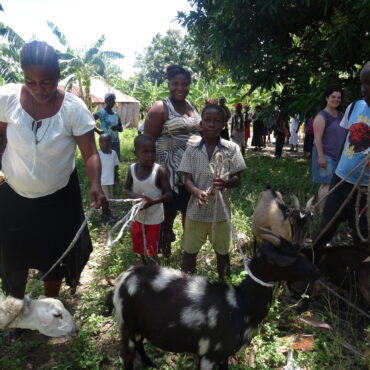 Maintaining a sustainable economy and participatory democracy for peasants

The National Congress of the Papaye Peasant Movement (MPNKP) has more than 100,000 members, making it one of the the largest and most broad-based national peasant organization in Haiti. The MPNKP is a confederation of grassroots groups, providing technical assistance, training and a platform for policy work as peasants strive to maintain a sustainable economy and participatory democracy. The MPNKP is one of Haiti’s two national peasant movements, and has a base of members in every department (state) in Haiti.

Grassroots’ support to the MPNKP has historically focused on the Creole Pig Repopulation project. The Creole pig was once the most important economic asset for Haitian peasants, literally their “piggy bank” but the entire population was killed under US pressure when swine fever hit the Caribbean. The MPNKP has done a great deal of work to reintroduce this life-giving asset, and more recently transitioned to goats that serve a similar function in the communities. This project serves an organizing tool that can work across regions and community groups.