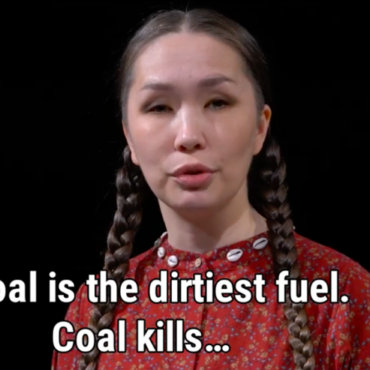 In mining affected parts of Russia, the level of air pollution is so high that the region often receives ‘black snow‘, which contains sulphur compounds, nitrites, and other harmful chemicals. When the snow starts to melt, a black layer becomes visible where coal dust has accumulated.

Domestically, it is pressuring the government to reduce dependence on extractive industries and shift to alternative economic systems. Internationally, it raises awareness about the human impact of importing Russian coal and seeks accountability from importing countries. It is forming international alliances to highlight the global impacts of the UK economy’s dependence on coal and advocating for Indigenous Peoples’ cultural rights before the United Nations Committee on the Elimination of Racial Discrimination and the United Nations Expert Mechanism on the Rights of Indigenous Peoples.