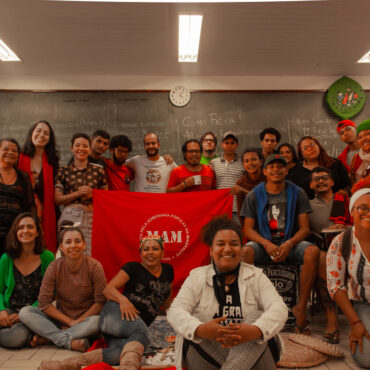 Changing the course of mining extractivism

MAM (Movement for Popular Sovereignty in Mining) articulated in 2012 as a reaction from communities impacted by extractive mining activities in Brazil. They are committed to supporting the organizing of the people and communities affected by mining activities (whether by pits, railroads, pipelines, roads or ports) and discussing the impact of the mining extractive model among affected communities and the broader society. Their struggle is for popular sovereignty in Brazil.

MAM focuses on the education and strengthening of its militancy, while understanding that political work forms the base for the sustainability of the movement. The Movement created a school whose diversity (in age, gender, department of origin, and urban/rural background) reflects the complexity of the mining problem in Brazil. It accounts for the many local realities that demand strategic tactics to ensure the success of the Movement’s strategies of resistance. These include stopping the advancement of mining activities and building a popular alternative to the globalised market, as well as raising awareness about the impact of the destruction that the hegemonic model of mining extractivism has in the country and the world.

MAM’s school can be seen as a protection and prevention strategy, being a part of MAM’s objective to change the course of mining extractivism. It does so by creating social debates to enhance the decision-making power of the Brazilian people.