There is a new road in the village of Dhapsung.

Dhapsung is located in a mountainous, remote, poor region of Nepal, in Sindhupalchok District. For the first time it’s possible to drive to the village itself.

While this is progress, roads also change the local economies of communities. Roads tend to lead to market-based agriculture, furthering the use of commercial seeds, pesticides, and fertilizers. Roads also lead to increased motor traffic and fuel consumption.

A group of climate change organizers saw Dhapsung as a community of the verge of change. So they decided to partner with residents and create a model village that runs entirely without fossil fuel.

“We believe preparation for a post-carbon economy is not just an act of [climate change] mitigation, but an act of adaptation in the long term, for the economy of Nepal,” explains Shail Shrestha who is the Director of the Sustainability School Program of the Digo Bikas Institute (DBI), a recent Thousand Current catalyst partner.

Working with allies at a solar power company, DBI installed a solar power panel that provides energy to all 36 households in Dhapsung. Energy alone, however, does not sustain communities. So DBI is also supporting residents through fundraising for the community school and supporting health camps for the children, as well as literacy programs for adults.

Additionally they are engaged in long-term planning with the residents on the ideal supports for sustainable livelihoods. The community still gets most of its food from outside of the village, so a pivotal aspect of the community development plan is training in sustainable agriculture. They also have plans to create a sewing cooperative run by women in Dhapsung.

Building on all that they have learned with the residents of Dhapsung, DBI staff have been active in national-level policy discussions in an effort to decrease fuel usage over time. They are in consultation with scores of activists and over the next year will convene two regional meetings of young people in the climate change movement. They share that the upcoming Lamjung Climate Convergence in September, “aims to empower young people [to] discuss climate policy, governance issues, conduct discourse on our development, international climate negotiations and climate justice issues.

DBI is unleashing every day people’s resilience and leadership, demonstrating how Nepal must evolve to survive the climate changes ahead. 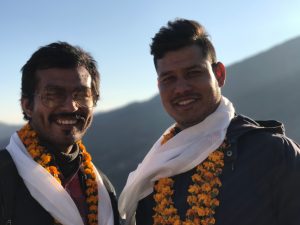